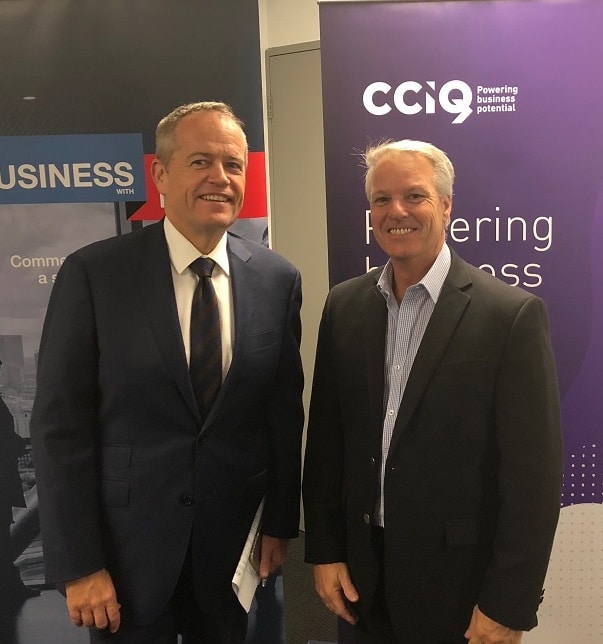 April 18, 2018 / Comments Off on Supporting Industry with Lower Energy Prices and Staff Investment is Key

At a meeting to discuss gaining relief for printers on the energy crisis and reinvigorating the industry through an increase in government support to train apprentices PIAA President Mr Walter Kuhn met with Opposition Leader Mr Bill Shorten.
“We discussed the energy crisis with Mr Shorten and were pleased that he highlighted in order to be viable going forward there needs to be a mix of all three power players with Gas, Coal and Renewable energy equally part of a consistent plan.”
A clear direction of the opposition leader was to invite discussion with all three energy forces so that businesses have a coherent plan in going forward.
Government need a coherent plan so industry can be confident investing in the future. A consistent long term option for the industry to invest in would give the industry certainty and in turn bring the price down.
This comes off the back of a growing awareness surrounding the urgency of supporting local printing and visual communications industries in Australia.
PIAA President Mr Walter Kuhn said ‘For the industry to thrive there need to be more highly trained staff coming through. We can do that through looking at increasing apprentices coming through.’
He said “it was encouraging to hear Mr Shorten mention that the biggest investment a business can make is in in its staff and the government should play a bigger role in assisting SME’s with investment in staff.”
Mr Kuhn said “It was good to hear that a large amount of the discussion revolved around SME’s as it is the largest sector in Australia by far.
Mr Shorten understands the difficulties that face SME’s in the Printing Visual Communications Industry and wants to bring those to a front.”
Sentiments such as this provide hope to the industry, confirming that the Printing Industries are within the priorities of both major parties.
“PIAA is actively engaging both sides of politics, as the solution to the energy crisis will require bipartisan support,” says Andrew Macaulay, CEO of PIAA. “Follow up discussions with the Federal Opposition this week include a scheduled meeting with the Shadow Assistant Minister for Treasury, the Hon Matt Thistlethwaite MP where we will raise the need for accelerated depreciation for investment in energy platforms, and re-inforce the need for Government investment in Vocational Education and Training.”